The Economy Was Never Strong

Commentators keep asking why the Federal Reserve can't raise rates if the economy is so strong?

They still don't realize that the economy was never strong. They confuse a bubble for strength. Without zero percent interest rates and QE the bubble can't survive. But a return to those policies kills the US dollar!
at 7:53 AM

So-Called Experts Are Still Optimistic About The US Economy

You have to go back to the summer of 2008 to see so many so-called experts so optimistic about the U.S. economy and so dismissive of overwhelming evidence that their optimism is unwarranted.

If The Fed Comes To Rescue, Gold Will Rally

What people don’t understand is how much worse the economy is going to become once the Federal Reserve comes to the rescue. Gold is going to go through the roof.

Podcast: The Market Was Expecting More From The Fed

Peter Schiff dissects the latest move from the Federal Reserve and its future implications for the markets.

"The selloff from the high to the low was just under 900 points. Earlier in the day the Dow had rallied up about 300 points because there was a lot of anticipation that even though the Fed was going to hike rates today, that it would indicate it would pause."

Highlights from the most recent podcast (December 14th):

Peter cited the current weakness on the Russell 2000 Index and how it is leading the market lower:

"In fact, the weakest indexes continue to be the Russell 2000 - I've been talking about the weakness in the small caps. That index is now down better than 19% from its peak just about 4 months ago. So we're almost officially in bear market territory. We'll probably be there by Monday, judging by the technicals."

Peter also mentioned the Dow Jones Transports as another index that is already trading at its lowest levels of the year:

"The other index that is leading the way down is the Dow Jones Transports. This index is now down better than 18% from its peak. Both the Transports and the Russell 2000 are at the lowest levels of the year."

Peter Schiff will be live on Fox Business News on Monday on the show "The Countdown to the Closing Bell" to discuss current market events.
at 5:07 AM

Federal Reserve: New Rounds Of QE Will Cause Stagflation

If we are going into recession and if the Federal Reserve is going to go back to the Quantitative Easing (QE) well and takes interest rates back to zero, the U.S. dollar is going to tank and the inflation fire is going to heat up and it’s going to be stagflation.
at 7:14 AM

The Most Expensive Christmas Tree In Europe

Munich-based gold dealer Pro Aurum made the Christmas tree out of gold coins. They've dubbed it "the most expensive Christmas tree in Europe. With it being valued at $2.6 million, I don't doubt them. 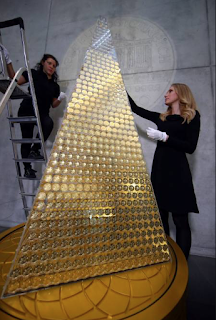 "The “tree” stands 3 meters tall and weighs in at 63 kilograms of pure gold. That translates to 138.891 pounds – approximately. It features 2,018 solid gold one-ounce Vienna Philharmonic coins, topped by a massive 20-ounce coin, placed into a golden star." - in Schiff Gold

Nouriel Roubini On Crypto and Blockchain

"Expect 1000s of crypto & blockchain ventures to go bankrupt. Almost all were total vaporware: they had no goods, services, products, software, apps. They stole the money & run. Crooks!"
- Nouriel Roubini, Twitter (December 10th, 2018)
at 6:39 AM

Ethereum Has Lost Better Than 90 Percent Of Its Peak Value

Ethereum has lost better than 90 percent of its peak value. But it can easily drop by another 90 percent to return to its January 2017 price!
at 6:51 AM

Real Estate Prices Are About To Drop

Now, I think with the stock market finally starting to go down, real estate prices are about to drop. They haven't fallen yet but if you look at supply, the supply is swelling of unsold homes that nobody is buying and that's exactly what happened in 2006, 2007. Before the prices went down the supply went up because people who have houses on the market they're kind of reluctant to drop their prices. They don't want to recognize where the reality is so the houses just sit on the market unsold. We have the biggest glut of unsold homes, new homes since 2007.
at 10:00 AM

A recent article from Mr. Schiff on how gold can go much higher from current levels: Peter Schiff: When Everything Blows, Gold Is Going Ballistic
at 7:35 AM

The balance sheet is still north of four trillion so they've tapered it a little bit ,I think a couple hundred billion. Interest rates are rising and the Federal Reserve still has an enormous balance sheet and according to what they've been saying they're about to start increasing the monthly draw and and that is gonna put even more pressure on the bond market especially since we are printing record budget deficits.

We're now borrowing over a hundred billion a month and the official numbers don't even capture that because so much of the budget is off budget. But it doesn't matter, they still have to issue the bonds to finance the off budget spending.

So what's important is how much the national debt is going up, how much bonds are actually being sold and so we've got record budget deficits and now we've got the Federal Reserve that wants to sell and the bigger problem is who's buying?
at 6:17 AM

Nothing discussed on the website is an offer to buy or sell or a solicitation of an offer to buy or sell any security or instrument or to participate in any particular investing strategy. All securities involve varying amounts of risk, and their values will fluctuate, and the fluctuation of foreign currency exchange rates will also impact your investment returns if measured in U.S. Dollars. Dividend yields change as stock prices change, and companies may change or cancel dividend payments in the future. Investments may increase or decrease in value and you may lose money. International investing may not be suitable for all investors.